The gallbladder is a small organ found in the upper part of the abdomen, near the stomach. It is responsible for collecting and storing a fluid referred to as bile. Bile helps the body break down and digest food. 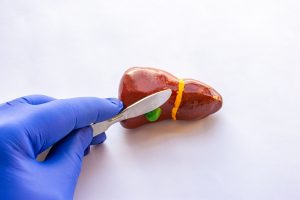 The gallbladder normally functions well on its own but becomes problematic when gallstones start to develop. Gallstones are hardened deposits of bile that accumulates and forms as hardened objects in the gallbladder. As the gallstones increase in size and number, they eventually disrupt the gallbladder’s functions. This condition causes the patient to experience

and discomfort. Gallbladder surgery may be necessary to remove the gallstones to restore functionality of the digestive system.

In some instances, gallbladder dysfunction can develop even in the absence of gallstones. When this occurs, patients experience similar symptoms, which can include gallbladder pain and discomfort, as well as nausea and vomiting. Gallbladder surgery is sometimes necessary to restore the normal function of the digestive system in this situation as well. Read More

was necessary, the surgeons would offer to treat the patient with open surgery. This technique involves making a large incision in the abdomen of the patient to remove the gallbladder.

now offer laparoscopic surgery as an alternative to open surgery. Laparoscopic surgery involves making smaller incisions on the abdomen allowing tiny instruments to enter the body and perform the actual operation. Since the incisions made are much smaller, the patient usually feels less pain and discomfort. Also, this minimally invasive procedure involves a shorter recovery time compared to open surgery.

is the latest breakthrough in minimally invasive surgical technology. This technique is similar to laparoscopic surgery, but involves the use of a robot performing the surgery with the surgeon at a control center. Some of the benefits of robotic gallbladder surgery include greater surgical precision and decreased patient pain after surgery.

Gallstone formation is the most common cause of gallbladder problems. These stones are usually cholesterol deposits that typically form in the gallbladder, but can also move into the bile duct, a tube connecting the intestines to the gallbladder. The movement of the gallstones into the duct usually leads to blockage, and this condition makes the patient experience gallbladder pain and symptoms. There are certain groups of people who are more susceptible to developing gallstones. This group includes overweight patients who are more than 40 years of age. Females with children are also at risk of developing gallstones. Gallstones are also still very common even in patients without these factors.

are not hard to detect. Several symptoms can be used as good predictors. Among the most common are the following:

While these symptoms are possible indicators of gallbladder problems, an accurate diagnosis must be made by a qualified physician prior to making treatment recommendations. In most cases, a doctor will recommend that the patient be tested using an ultrasound. This technique offers a picture of the body’s internal organs by using sound waves. In case the ultrasound test becomes inconclusive, the doctor may also order a CT scan or a HIDA scan. The HIDA scan makes use of a special dye, which is easily traceable in the body and shows how well a person’s bile duct and gallbladder are functioning.

There are both surgical and non-surgical treatment options for gallbladder symptoms. These are described below.

Changing one’s diet is a good initial step when dealing with, as well as preventing gallbladder problems. The diet modification used to address gallbladder problems usually involves taking in less fat and salty substances. However, this method is not always successful at alleviating gallbladder symptoms, and it will not do anything to remove the gallstones that are already present.

Gallbladder removal is the most popular treatment for gallbladder symptoms and provides a definitive management option for patients. This method of gallbladder surgery involves the complete removal of the gallbladder along with any stones. Gallbladder removal, as mentioned previously, can be performed using either minimally invasive (laparoscopic or robotic surgery) or open surgery.

Over the years, laparoscopic/robotic gallbladder surgery has become a preferred option for treating gallbladder problems. The reason is because the procedure offers several advantages, particularly the ones provided below.

How Laparoscopic Robotic Gallbladder Surgery Is Done
Laparoscopic/robotic gallbladder surgery is a convenient and straightforward procedure. It is usually conducted using the following steps.

Before the surgery is performed, patients are administered with general anesthesia. To reduce any pain or discomfort caused by the procedure, and to allow complete relaxation of the abdominal muscles for the planned surgery. The patient is asleep during the entire process and does not experience any sensations during the procedure.

The gallbladder surgeon makes several small incisions in the patient’s abdomen. Then a small narrow tube is passed into the abdomen. Carbon dioxide gas is then pumped through the tube inflate the abdomen and allow the surgeon to get a better view of the patient’s internal organs and anatomy.

Once inflated, a tiny high-resolution camera is inserted into the abdomen through another tube. The camera is used to transmit images back to a console in the operating room monitored by the surgeon.

In these situations, the surgery is performed the same way. The only difference is that the doctor guides the robot instead of manipulating the instruments directly through the console. An x-ray of the bile duct and gallbladder may be taken during robotic gallbladder surgery to pinpoint the exact location of the gallstones and to determine if any stones are blocking the bile duct. After the gallbladder removal, the patient is generallyallowed to go home that same day. However, there are cases when the patient is not discharged immediately. Admission to the hospital is rarely necessary with minimally invasive surgery.

Medical Arts Surgical Group in Meridian, MS, has some of the